Ambient Wood is an innovative educational experience exploring how biological ideas can be learnt in a real environment augmented by technology.

In a wood near Sussex University a group of school children gather for a day of activities. The children divide into pairs and each pair are given a PDA, a light and moisture probe and a small walkie-talkie so that they can communicate with a facilitator.

The probe can be pointed into the air, placed into the ground, pressed against the bark of trees ... or even poked into noses - and produces a simple display of the light and moisture levels on its screen.

Although the children do not realise this at the time, all the readings they make are being recorded through a wireless network and the probes are equipped with GPS so that the location of each reading is also recorded.

As the children walk through the wood they pass near wireless beacons. Passing these may trigger messages and information to appear. Passing one beacon they hear a strange slurping sound - a massively amplified recording of a butterfly sucking nectar!

At one point in the wood the children find a strange contraption shaped rather like an old hat-rack or a small metallic twiggy tree. This is the 'periscope'. It is used for seeing things that are normally unseen (one of the strengths of virtual reality - see ch. 20, p.738).

Inside the hood of the periscope is a small computer screen and this is controlled by the 'handles' of the periscope. Moving the handles from side to side pans a virtual view of the wood. Twisting them makes the image move up and down. This is a rather odd mix of virtual and augmented realities. The periscope is set in the real environment and portrays a virtual view of the environment, but you can only see the real environment 'round the side of' not through the image. Children would walk behind the periscope and expect that their friends could see them in the virtual image. Although our lives are filled with technology, we are still cognitively 'built' for the real world and find it hard to adjust to these half-real situations (see also ch. 18, p. 653 on 'natural' cognition).

Around the periscope itself are small petri dishes containing various natural objects: a spider, some fungi, etc. Each item is marked with an RFID tag. One of the dishes has an RFID reader and when the items are placed on this they are detected. The virtual image then shows the ecological effect of adding the organism to the habitat.

This exploratory investigation allows the children to build complex understandings of the rich ecological web including the fragility of habitats. This is a form of constructive learning where the children are able to actively create their own individual knowledge structures.

Constructive learning theories usually emphasise the importance of authentic situations. The wood provides just this, but of course it is impossible (or at least inadvisable) actually to introduce new species and watch their effect on the environment. The technology serves therefore not to substitute for a real situation, but to make possible investigations that would otherwise be impossible and do so in as contextual a manner as feasible. 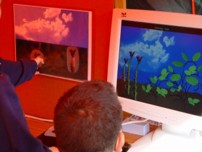 Within the wood is a tent, 'the den', where the children gather at the end of the session to discuss their findings. The den contains computer displays and various augmented materials.

The light and moisture readings they have taken are plotted on a map of the wood and the children are able to look for patterns - for example, is the level of moisture in the earth higher or lower near trees.

Notice how the children engage in data collection, hypothesis generation and testing - the key elements of scientific investigation - both while in the wood taking readings and also back in the den comparing and collating results.

Also this scientific thinking is not taking place alone. Both in pairs in the wood and as a class back in the den they are explaining their own ideas and understanding to one another as well as hearing each others thoughts. This collaborative learning obviously allows each child to benefit from the groups as a whole. However more important is that the process of explaining to others engenders reflective thinking ... not just learning things, but thinking about the knowledge. This reflection is an important aspect what is called meta-cognition, the higher-level thinking that allows us to learn better throughout our lives. 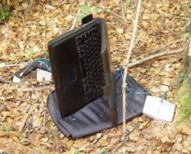 Some aspects of the technology in the Ambient Wood are very clear to the children: the PDAs, the probes, the walkie-talkies, the periscope, the display back in the den. But behind the scenes there is even more at work. In the trees and scattered around the wood were numerous computers and pieces of electronics.

The wood seems a very open environment compared to the walls and ceilings of a building, but the leaves and wood of the trees are 90% water and water absorbs the radio waves. It is impossible to have just a few wireless base stations that talk to everything and all the computers had to be set up to relay wireless messages to one another. Even then they had to be placed below the leaf canopy as in summer the leaves blot out radio transmission at even very short range.

The Ambient Wood's technology doesn't just depend on computers, behind the scenes also a group of technicians were constantly working to keep the various aspects of the wood running ... not least literally running around between outside sessions replacing the batteries in the many, many devices ... the wood doesn't come equipped with mains electricity.

Whilst this level of support is acceptable for experiments; it will be some time before the technology is mature enough to allow easy deployment of this sort of rich educational environment.

Ambient Wood is one of the experience projects that are part of EQUATOR, which was critical in understanding and developing many kinds of ubiquitous technology.