In many places and projects arts and technology are coming together and learning from one another.

There are various reasons for this.

All ar important, but in this case study we'll focus on the last of these ...

This is a constant problem in ubiquitous computing where we know that devices are getting smaller and more interconnected, but attempts to produce demonstrators of future technology often seem at best trivial toys and at worst appear like distopian hightmares. Much of the invasive future technology in the film 'Minority Report' was based on planned and existing ubicomp technologies, but painted a world devoid of privacy and calm.

Explorations in the context of the arts can break this Gordian knot. The aim of an artistic performance or installation is not to be useful or 'do somehing', but to provoke thoiught and creaye an aesthetic experience. With these very different goals it is often easier to create artefacts and events that are both genuinely 'good' as art and also allow us to explore novel forms of interaction.

An example of this is a performance by .:thePooch:. called the schizophrenic cyborg. 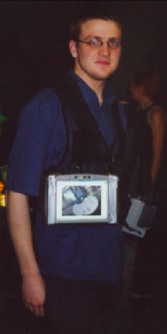 In an earlier ethnography of 'real cyborgs (that is people who wera wearable computers all the time, not ones form Star Trek!), Jennifer Sheridan had noticed that there were interesting three way interactions at play. While talkiong to a cyborg they would go silent, look upward or say "wait a sec...", while apparently alone withn them, they were in fact also involved in electronic communication through head-mounted displays.

In some ways these three-way conversations you talking to the cyborg, the cyborg talking to someone else is not that different from someone having several online chats going on at the same time ... and yet it seemed different, the fact that the person is there and apparently alone and yet not so :-/

The schizophrenic cyborg was envisaged partly to explore these issues further. At a large performance arts event the cyborg walked around amongst the crowds of people. Whereas most wearable computers gave private displays to the wearer, instead he wore a display strapped to him that he could not read himself and was only visible to those he met. (yes, like a teletubby!) 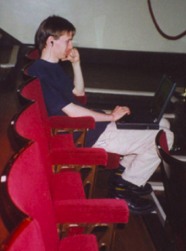 In a balcony overlooking the event was the 'parasite'. The parasite had a laptiop connected to the cyborg's screen by WiFi and could send images, text, live video feeds to it. The parasite could not hear what was being said, but from a distance could see when someone was interacting with the cyborg.

Initially the parasite would send images or text to invite people to interact: "ask me how I am", "hug me". The cyborg knew that the parasite was sending things ... but not what was being sent. Those who met the cybiorg would initially assume that the cyborg controlled the screen. Many found it hard to believe, even when told explicitly by the cyborg, that there was someone else 'in control' and found the interactions strange or 'creepy'.

For these participants interacting with the person beyond the screen while that screen inhabited the same space as the cyborg made it very unclear who they were addressing. The effect on the cyborg himself, even though he was aware of what he was doing and of all the technology around it, was even more odd. People talked to him and yet through him, as if he were not there at all. In interviews after the even he would sometimes say "I" and sometimes say "the cyborg" and described feeling out of control of his own body.

"From (observers) perspective, they saw a strange looking person who wanted a hug. From my perspective, I was only aware that I, or the cyborg within, wanted a hug, after it was received, and needed to adjust my reaction accordingly." (post performance interview with a cyborg)

While this seems a somewhat extreme form of interaction it gives many insights into 'normnal' interaction.

First because, normal interactions are becoming less and less 'normal', for example fabrics that change colour will mean we may soon be wearing clothes that alter themselves! Indeed we already mentioned multiple chat sessions ... how dop you deal with a discussion with one friend who is about to get married in one window, in another an online interview for a job and in a third while in another your sisiter who has just split up with her boyfriend - our sense of identity is increasingly under threat as we multitask our emotions.

Second because abnormal interaction tells us about normal interaction. In many areas it has been the boundaries, the extremes and the 'broken' cases that tell us about the central phenomena. Human to human interaction is so nornmal we are blind to it and as we see 'broken' interactions we can see the subtlty and power or ordinary interactions with greater clarity and often see for the first time aspects that we previosuly took for granted. This technique of breaking things to see the ordinary is also used by the ethnographers in 'breaching experiments'. For example Garfinkel once asked his students whne talking to theor friends to try to only answer questions directly with no elaboration or follow on statemenst of theor own. They were suggested to only do this for 5 minutes, but even this was too much for many as normal conventions of conversation collapsed. 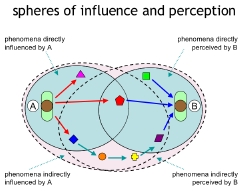 In the case of schizophrenic cyborg this understanding through breaking has been found to be the case for both interaction and performance art itself. The analysis of this and related pieces has given rise to a whole theoretical framework for understanding the way technological interventions change 'performance.

web site for more explorations in arts and games