case study    Mack Room - visiting together ... but not together

The 'Mack Room' is a gallery in the Lighthouse arts centre in Glasgow. It is dedicated to thee work of Charles Rennie Mackintosh, the influential early 20th Century designer and artist. The room has a information panels and exhibits reflecting different periods of Mackintosh' career and small booths where you can see and hear audio-visual material.

As part of the Equator project a team set out to design a mixed reality experience that would allow a real visitor in the Mack room to have a shared visit with others using VR or simple web pages. You can imagine that this would be a way for grandparents who live far from their grandchildren to still share a day out, or for a group of schoolchildren to visit a museum and share the findings in real time with the rest of theor class in the school. 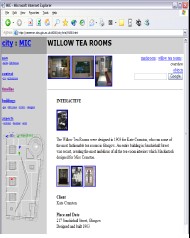 The room was instrumented with ultrasonic sensors and a virtual reality map of the room was constructed together with a 2D map and a web site. Groups of three people took part in the experiment: one in the room itself, one using desktop VR and one within plain web pages. All of them had a 'location' in the room: for the 'real' visitor sensed using the ultrasonics, for the VR visitor the location the the avatar in the virtual Mack room, and for the web visitor a fixed locatioon for each web page corresponding to the general area it described. They also all were able to talk to one another using real-time audio.

The 'real' visitor walked around the room and looked at the exhibits. He carried a PDA that was equiped with WiFi so that it could communicate and was part of the ultrasound system. On the PDA he could see the map showing his location and that of the other two visitors.

The positioning system worked by timing how long it takes for ultrasonic chirps to go from the PDA to fixed sensors. This relies on a good 'line of sight' to the fixed sensors and can be confused by reflected sounds. In fact, the fixed parts of the ultrsound system were placed above the exhibits where they were out of sight ... this is an art gallery! Unfortunately, this meant that they were not placed optimally to ensure the best tracking and so the location was more accurate in some parts of the room than others. It was worst if the visitor went inside the AV booths.

The web visitor just moved between ordinary web pages. The only 'augmented' part of her experience was the 2D map and the audio.

One of the goals of the experiment was to see how people coped with the different kinds of experience - would they simply do their own thing or would they have a shared visit togther just as if they were all there together? In fact, and quite surprisngly, the groups did remain 'together' discussing things with one another and moving around their individual representations of the room in sync.

Even more surprising was the fact that they seemed to have equal 'control' of the experience. One might imagine that the real visitor, with the most immediate view of the exhibition, would have become the 'tour guide' and led the others around. However, at different times each kind of participant would take the lead inviting the others to look at new things. 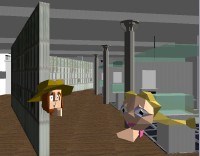 In one of the groups the VR visitor was observed to occasionbally 'wiggle' her avatar. It turned out that this was a deliberate way in which she could call attention to her loaction. The real visitor would wander around and even when 'still' would have slight movements. In contrast the VR person would be rock steady when hands were off the keyboard and hence not very visible. In order to add emphasise to speach and just 'be seen' she would deliberately give her avatar a little wiggle!

The 'real' visitors also had occasional 'odd' behaviours. When entering the AV booths some of them would hang their arm out of the booth holding the PDA outside. This was because they became aware of the different levels of location accuracy in the room and in particular realsied that when in the booths they would be shown at some totally different location of the room. By keeping the PDA out of the booth they were making sure that theor colleagues could see them more clearly.

In other projects and experiments using location systems the poarticipants have similarly found ways to get around or exploit the limitations and inaccuracies of the location sesning and network access and follow up experiments have focused on using this explicitly.

The desktop visitors have nothing to distract them from the shared experience, but the real visitor was in the real room with other visitors wandering around. It would be reasonabel to assume that he would get distrcated sometiems, perhaps notice a groupm of other visitors looking at somehtinga dn be attrcated to it, perhaps evenm temporarily ignoring his virtual colleagues.

In fact just the opposite occured. At times when the VR or web visitor said "look at that", the real visitor would go to look and perhaps rudely put his head in front of a 'normal' human visitor in the museum. The virtual co-visiors had temporarily become more real than the peoplem in the space with him.

pages about the Mack Room project at Glasgow University