Traditional ethnographic techniques involve watching people at their activities over considerable periods of time, often supplemented by video or audio recordings. This can be difficult even in a work environment but is far more difficult in domestic settings - do you want someone with a notebook sitting the corner of your living room?

Also observations can tell you about what people do, but less about what they feel. What is really important to them and what just mundane?

Cultural probes are one way to access environments that are difficult to observe directly and also to capture more of this 'felt life'.

Selected volunteers are given probe packs, like the one below. The participants use the items in the pack over a period of a few weeks and then return the pack. The items in the pack depend on the circimstances, but are all designed to stimulate thought as well as capture experiences. 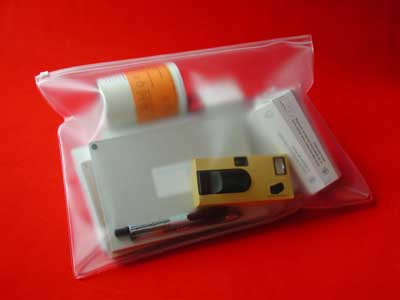 In this pack you can see a small disposable camera and on the right a listening glass. The latter is used to listen places (walls, doors) and write what is heard! The same pack contained a small solid state recorder packaged in a sleeve that said 'dream recorder'.

This pack was used by designers at the Royal College of Art, London, to study the way people see their own homes. Volunteers were solicited through a newspaper advert and the reuslts used to enable designers to get a 'feel' of the meaning of home for many people.

Cultural probes were also used to study the hostel for former psychiatric patients discussed in the SPAM case study. In this environment, traditional ethnographic observing and following people would have been deeply disturbing for some patients. Of course a different kind of pack was used here. It would have been unwise to ask patients to listen at the walls of their rooms. It is not only designed systems, but also study methods that need to be ethical and safe.

Once we consider systems beyond the traditional office PC, esepcially those involving personal experience, HCI needs to establish new methods of study. Other researchers have used diary studies asking participants to note particular kinds of incidents. Another group asked parents to give them lists they kept (shopping lists, to do lists). Role play has also been used to get people to act out aspects of their life that they might not wish to be observed.

You can read more about cultural probes at the EQUATOR pages on probes and more details of the home study at the RCA pages on domestic probes.