online!    how many computers?

The exercise on page 60 reads:

In a group or class do a quick survey:

Collate the answers and see who the techno-freaks are!

If you haven't already worked this out, these were slightly trick questions!

You can see Alan answer this in this video, or read below.

How many computers do you have in your home?

Did you answer two or three, perhaps a laptop, desktop and maybe an iPad?

Or maybe you are a bit of a geek and had more: several desktop computers, games machines, multiple laptops of various ages? maybe even some retro home computers from the 1980s?

However, do you have a television, HiFi, microwave oven, washnig machines, central heating controller?

Each of these has one or more computers within it - literally computers are all around you.

Here are some in Alan's house: 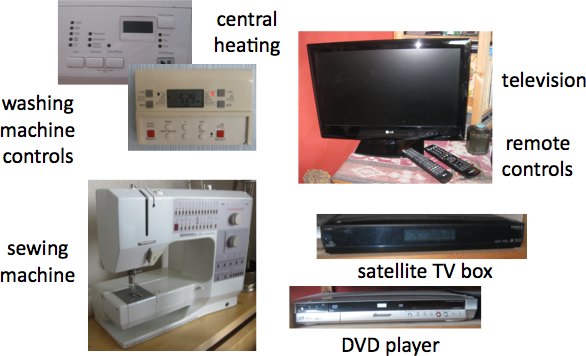 On recent trains deployed on the British West Coast rail network there are over 200 computers in each carriage - from the obvious ones in the over-seat displays saying which seats have been booked and the electronic doors, to those behind the scenes in the braking system, air conditioning, and lights.

However, now it is not just computers in appliances and embedded in the environment, we also carry many computers around our bodies:

How many computers do you normally carry with you in your pockets or bags?

Alan has emptied his bum bag and this is what he found: 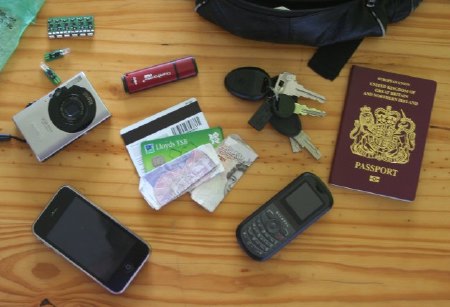 Let's start with some obvious ones:

That's four, but then there are a few less obvious ones:

So, even discounting the intellgent LEDs carried for demo purposes, that is seven different kinds of computer device.

Look in your pockets. You may also have an MP3 player, an entry card for your office, perhaps a bus or train pass with RFID, maybe even eCash.

Our world really is suffused with computation.