online!    Early lessons - It's not all about technology 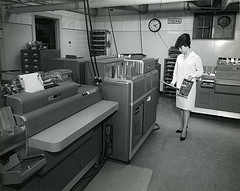 HCI as a discipline emerged in the early 1980s, but has its roots going back to Brian Shackel's "Ergonomics for a Computer". My earliest introduction to HCI came not from an HCI text book, or even an ergonomics one, but from a 1960s book on Systems Analysis. From this I learnt two important lessons that have stood me in good stead through my career:

1) actually watch and talk to the user

2) it's not all about the technology

I was still in school, I guess around 13 or 14, and on holiday at the seaside. One of the first things we did was register at the local library and I was pleased to find a book about computers. I'd never come across the term 'Systems Analysis' at that point (I only had Ladybird's "How it works: The Computer") and I know the book covere alot of ground, but the anecdote I recall went roughlyl as follows.

The author/analyst had been asked to advise ona new computer printing system. His clients had only recently purchased a new printer, but it was not performing as they had hoped and they thought that the solution would be a computerised system to improve the throughput.

The analyst spent some time observing the use of the printer and then went back to the client.

"can you give me a budget of a hundred pounds a year?"

They were somewhat taken aback, they had been expecting to spend tends of thusands of punds ona state of the art system.

The printer, while relatively new, was still quite dirty to use. The operators were all young women who clearly did not want to get ink on their clothes. The budget was for white overalls.

The overalls were purchased, the efficiency of the print unit rose, and the client saved many thousands of pounds.