Technology probes are a means for users and designers to envisage radically new technology or applications through the use of early high-fideity prototypes.

When we are improving something well understood, we can look for the problems, the gaps, and users are often more than willing to tell us what is wrong!

However, when we are dealing with something new we may not be able to envisage how it might be used. If you had asked people several years ago about gaps in their social lives, they are unlikely to have suggested knowing what their friends were eating for breakfast, or sharing photographs of dressed-up cats, and yet today social networks are ubiquitous.

A technology probe is a form of early, but high-fidelity, prototype, deployed, often in a real-world setting, as a prompt to help people make sense of how something new might fit into their day-to-day lives.

High-fidelity protoypes are usually created relatively late in the design process as a way of sharing "what it will be like", with clients, users and other designers. In contrast a technology probe is more about exposing potential, suggesting questions to ask, new uses, opening up discussion.

The first generation Hermes office doordisplays are a good example. The physical install, was created using PDAs fixed to the wall with a bent aluminium frame – 'lash-up' technology! However, they included a fully functioning system for a form of electronic-post-it note. This was installed for over 18 months (until the department moved to new building!) and was used extensively, but its primary purpose was to understand the potential for this kind of situated display. 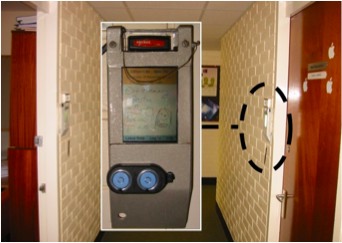 Not all technology probes are installed for as long, indeed they may be used in a more controlled environment, or simply as demonstrators, the key things is to be well-enough developed and close enough to reality that users can be inspired to see how the underlying techology might transform their lives.

The following video talks through many of the aspects of technology probes (Although I would disagree that prorotypes should not be throw-away!).